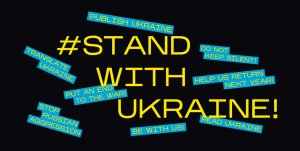 At this year’s Bologna Children’s Book Fair, one of the largest fairs in the book world, Ukraine will be represented with an empty manifesto stand. This way, the Ukrainian book community appeals to colleagues from other countries for support, in order to return to the Bologna Book Fair next year.

Appeal to the Western Book Community in English

The International Book Arsenal Festival has co-initiated the manifesto stand. Its design was created by the Art Director of the Festival Lera Guevska. The organizers of the Bologna Book Fair are providing a free stand to Ukraine, meanwhile refusing the participation of Russia, as well as urging publishers-participants to bring Ukrainian translations of children’s books in order to collect them together as part of a joint exhibition.

Free presence at one of the world’s largest book fairs was made possible thanks to the joint efforts of the Ukrainian Book Institute, the Ukrainian Institute, PEN Ukraine, the Book Arsenal and the BookForum International Festival.

The manifesto stand will be exhibited throughout the Bologna Book Fair that will be running March 21 to 24, 2022. The stand was designed by the art director of the Mystetskyi Arsenal, Lera Guevska.

During the fair, the visitors of the stand will have an opportunity to get acquainted with the rights catalogues of Ukrainian publishers from the Book Arsenal Ukrainian Literature: Rights On! project; to get information about participation in the translation programs of the Ukrainian Book Institute; to post photos / videos of the stand in social networks using the hashtags #StandWithUkraine, #StopRussianAggression; to print stickers and posters with slogans supporting Ukraine.

Detailed information is available on the website of the Ukrainian Book Institute.

The Ukrainian stand and the support of the organizers of the Bologna Book Fair are an opportunity to widely inform the visitors and participants about the Russian-Ukrainian war, as well as to unite people of the book industry who care. We call on everyone to resist Russian aggression together with us, to translate Ukrainian books into foreign languages so that as many people as possible can hear Ukraine and realize that in this war Ukraine is standing not only for itself, but for the whole Europe.