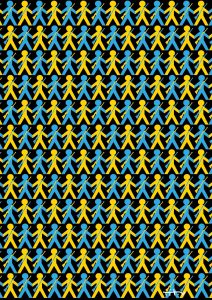 Together with the International Book Arsenal Festival and Gogol Bordello band, a team of Kyiv-based art volunteers and book illustrators has launched a charity initiative called ArtDopomoga.

ArtDopomoga is a platform, which is offering artworks created in Ukraine during the war. All proceeds from your purchase of the artwork will go to support Ukraine in its fight.

On the ArtDopomoga website you can purchase stickers, posters, prints on fabric and t-shirts, music, and NFT created by Ukrainian artists and illustrators. You can also help Ukrainian artists directly by sending funds to support their work.

International Book Arsenal Festival is the largest intellectual event in Ukraine, founded by Mystetskyi Arsenal in 2011. Each year, it hosts more than 100 foreign guests, more than 200 publishers and cultural institutions, and more than 55,000 visitors.