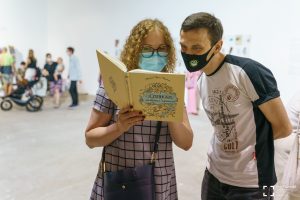 The 11th International Book Arsenal Festival has started accepting applications for participation in the Program of the events and the Book Fair. This year the Festival will be held on May 25-29.

The structure of the Book Arsenal Festival remains unchanged: in addition to the traditional Book Fair, the Festival Program of the events will include the Focus Theme Program, the Literary Program, several special projects, the Music Program, the Kids&Teens Program, professional programs, book design and illustration programs, and the Best Book Design Contest. The events of the Festival will be held on 11 stages. The 11th Book Arsenal Festival has announced the focus theme and the curators.

However, there will be some changes. Unlike last year, the whole area of the Fair will be located in the Arsenal building. A new section – General Publishers – will be introduced for those participants who publish literature of various genres and have previously exercised the right to have 2 stands. The Indie section and the Comics and Graphic Novels section will be located on the 2nd floor; they are offered the most affordable conditions of participation.

Yuliia Kozlovets, the Festival Coordinator, talks about the peculiarities of preparing the 11th Book Arsenal Festival:

In order to effectively use the limited space of the Mystetskyi Arsenal and to present a wide range of publishers and high-quality books at the Festival, the Arsenal expert committee will select the participants of the Fair and form the Program of the events. The Book Arsenal pays special attention to new independent market players. The results of the selection will be known by mid-March.

The Book Arsenal is an international event organized by the Mystetskyi Arsenal. The Festival has been held since 2011, and it annually gathers together more than 200 participating organizations and over 50,000 visitors. In 2019, it received the Literary Festival Award from the London Book Fair (LBF) International Excellence Awards. The mission of the International Book Arsenal Festival is to create such interactions between people, communities and institutions when the combination of aesthetic experience and intellectual engagement in the context of the book enhances the ability of man and society.